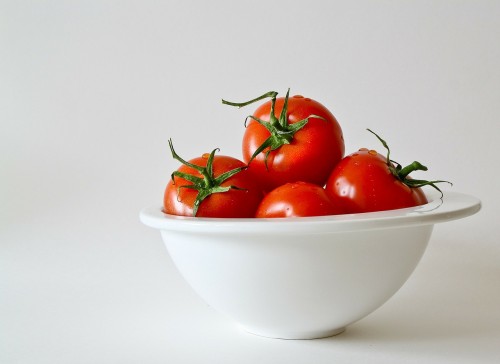 The firm skin and succulent flesh bursts with a medley of flavors, simultaneously sweet, sour and savory. For six short weeks I eat as many tomatoes as I possibly can. Yes, unlike those tasteless, mealy things called tomatoes in the grocery other times of the year, fresh, vine-ripened tomatoes have a delightful taste, and a satisfying texture.
I make a beeline to roadside farm stands or the farmers’ market the moment they start to debut late in July. Deep red, yellow, orange, heirloom, green I try them all. Piled in bins, straight from the field, they are firm, and likely have a dusting of dirt, added proof that they have had very little handling.

Recipes abound for tomatoes in the summer. But, for me, the simpler, the better. In fact, I lovingly take my bounty, place them, one-by-one in a big wooden bowl front and center on my kitchen counter. Not only do they have curb-appeal but they have the lure of candy. Wandering into the kitchen for a snack, those tomatoes beckon me. I choose one, cut it into sections, like one would an apple, drizzle with a bit of olive oil, sprinkle with a bit of sea salt, and ohhhh, they taste divine!

Tomatoes are bursting with nutrition — lycopene, beta-carotene, folate, potassium, vitamin C, flavonoids, and vitamin E. Get ‘Em While They’re Hot: Tomatoes, The Summer Superfood Fresh tomatoes are good for the heart. The antioxidant properties of tomatoes protect the heart by inhibiting atherosclerosis, according to researchers at the University of Illinois. Tomatoes also reduce LDL cholesterol, triglycerides, and help lower blood pressure. And you thought my love affair with tomatoes was based purely on taste?

Tomatoes also elevate bone health. George Mateljan of the World’s Healthiest Foods describes a study in which tomato and other dietary sources of lycopene were removed from the diets of post-menopausal women for a period of four weeks. In that short amount of time, women in the study started to show increased signs of oxidative stress in their bones and unwanted changes in their bone tissue. The researchers concluded that the removal of lycopene from their diet put women at increased risk of osteoporosis.

Strong heart, strong bones and amazing flavor — put in-season tomatoes at the top of your list. Oh, and the processing of tomatoes may significantly affect the bioavailability of these nutrients, making fresh tomatoes far superior to canned — so all the more reason to eat them now!

The season is now — tomatoes, the summer superfood — are basking in their splendor. Farmer’s market … here I come!